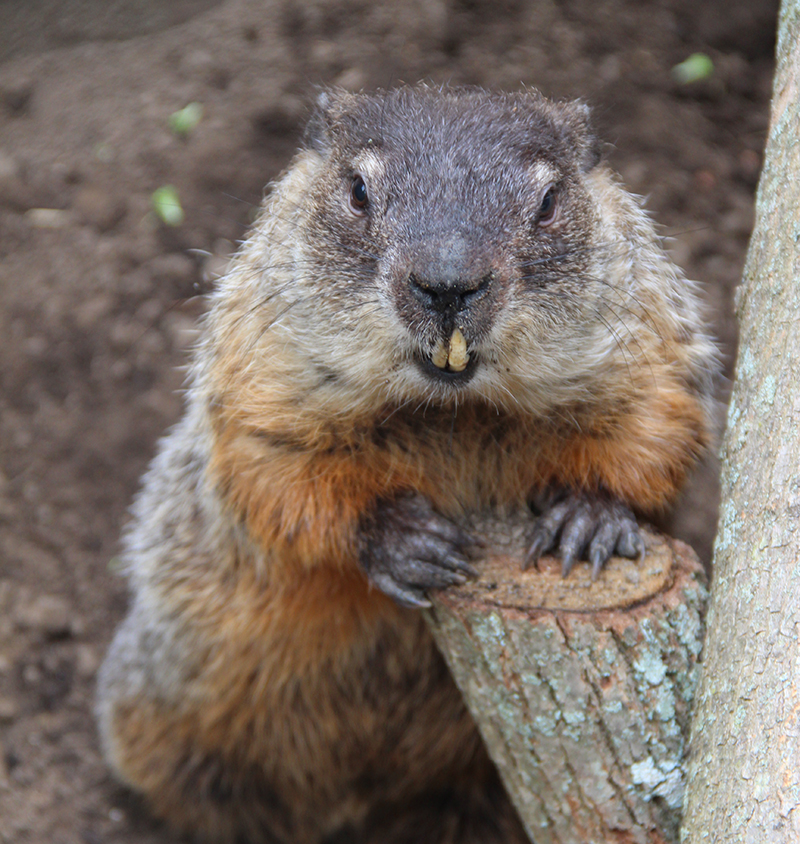 As a very young woodchuck, she was found in an injured condition and taken into the care of a state-licensed wildlife rehabilitator. Because she is accustomed to being fed and cared for by humans, she is not equipped to survive in the wild on her own. She found her permanent home at Drumlin Farm, where she began her teaching career as one of Mass Audubon’s wildlife ambassadors.
Since 2008, Ms. G has been delivering an annual forecast on Groundhog Day with her prediction for the rest of the season. Her prognostications are celebrated by many fans who attend the yearly ceremonies every February 2nd at Drumlin Farm. Her accuracy has gotten lots of media attention, and audiences and meteorologists alike always enjoy seeing her furry face on camera.

Over the last several years, Ms. G supporters, including elementary school students from Wellesley, ran a successful campaign to “elect” her to the post of official State Groundhog for the Commonwealth. Wellesley Representative Alice Peisch wrote the Ms. G Bill, and with lots of hard work by the students, the bill passed favorably through the House and Senate. During the summer of 2014, the bill was signed into law by Governor Patrick. February 2, 2015 will mark Ms. G’s first official forecast as State Groundhog!

When not forecasting the weather, Ms. G is still a very busy groundhog. Along with other captive wildlife, she travels to schools, scout troops, and other organizations as part of the Mass Audubon Ark Outreach program to educate children and adults. Her charismatic personality and the fascinating animal adaptations of her species have made her a favorite ambassador for Mass Audubon in its mission to protect the nature of Massachusetts.

Mass Audubon Drumlin Farm seeks to promote an awareness of the interdependence of people, land, and wildlife through environmental education, stewardship of regionally significant habitat, and sustainable agricultural practices. While Ms. G herself lives a quiet life in a secluded part of the farm away from the public eye, you are welcome to visit Drumlin Farm to view other native wildlife on exhibit, see the farmyard livestock and barns, and enjoy miles of trails through fields, forest, and wetlands.
Ms. G
MASSACHUSETTS STATE GROUNDHOG
© mastategroundhog.com