Celebration at the State House! 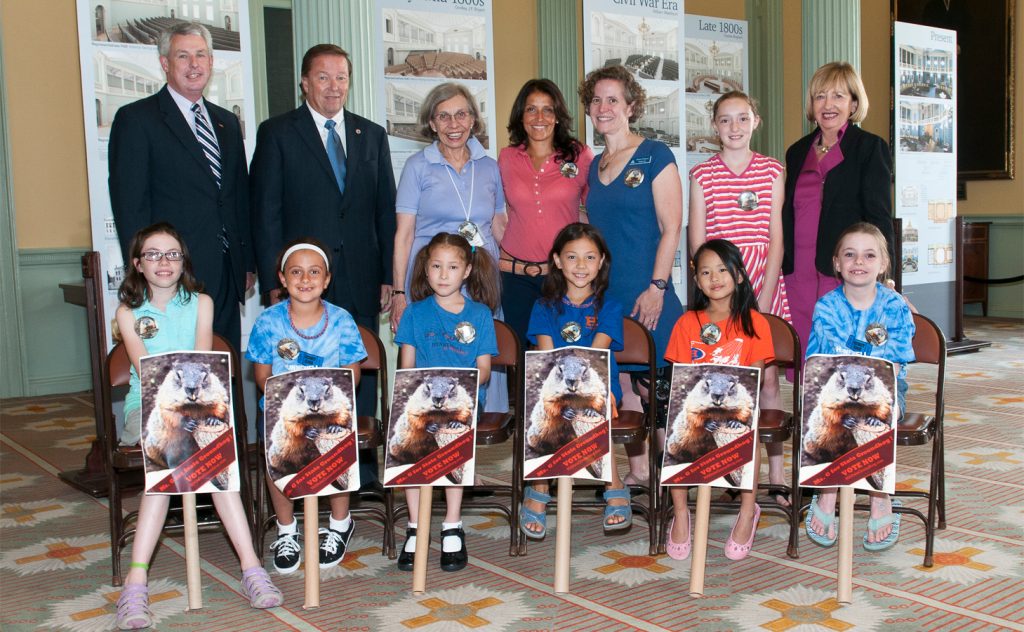 Professional photo taken at the State House right before entering the Senate floor with Ms. G's big and little supporters from Senators and Representatives to students!
On left to right, Rep. John Keenan, Senator Richard Ross and at far end Senator Cynthia Stone Creem. All 3 were co-sponsors of the Ms. G Bill. 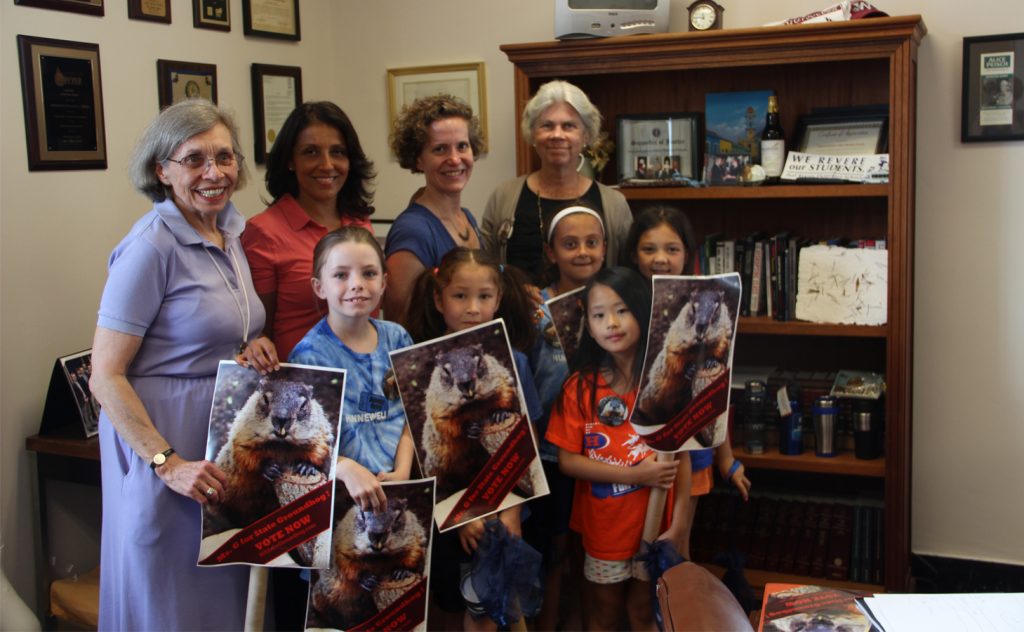 Hunnewell students celebrating in office of Rep. Alice Peisch after Ms. G's Bill passed Senate on July 17, 2014.
Rep. Alice Peisch, the sponsor of the Ms. G Bill, is located on the right. 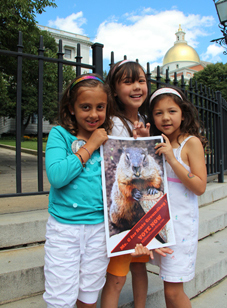 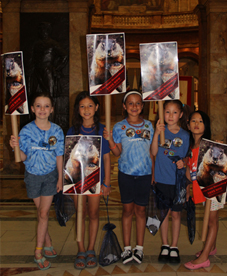 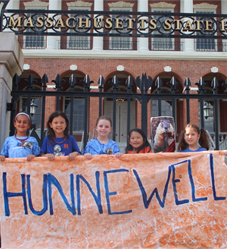 Hunnewell students celebrate on the steps of the State House after the Ms. G Bill is officially passed by the Senate!

Longtime Boston TV Meteorologist Mish Michaels led the campaign to make Ms. G the State Groundhog for the Commonwealth. Ms. G's official duties now include posting a forecast on February 2nd, Groundhog Day! Mish was joined on the campaign trail by her 8-year old daughter and her daughter’s classmates in Wellesley at the Hunnewell Elementary School.
Mish first met Ms. G, a resident of Drumlin Farm in Lincoln, back in 2007 while working with Mass Audubon on stories for WBZ related to the environment, weather, and climate change. Mish encouraged the Mass Audubon to host an annual Groundhog Day event featuring Ms. G. In 2008, Ms. G posted her first forecast on February 2nd. A star was born! In fact, Ms. G has had better local forecast accuracy with her “shadow/no shadow” forecast than Punxsutawney Phil way down in PA. It is Ms. G’s local weather expertise that inspired Mish to take on the role as Ms. G’s campaign manager.
In early 2013, Mish met with Wellesley Representative Alice Peisch to discuss the road ahead for Ms. G. The goal—not only to have a groundhog with local forecast expertise, but to encourage students to study weather by making Ms. G the official State Groundhog. Representative Peisch crafted language for the proposed bill, H.2864. All bills are assigned to a Committee to begin their journey towards becoming a law. Ms. G’s Bill was initially assigned to the Joint Committee on State Administration and Regulatory Oversight. Thanks to the well-crafted testimony of Hunnewell Elementary School students in Wellesley, and the support of others in the community, the Ms. G Bill was reported out favorably by the Joint Committee on State Administration and Regulatory - View video. Ms. G’s Bill then moved to the Steering, Policy and Scheduling Committee where it was voted out favorably and has also been voted out favorably from the Bills in Third Reading Committee. The House of Representatives voted favorably to send Ms G.’s bill onto the Senate for consideration the last week of March, 2014.
The Ms. G Bill was debated by the Senate on Thursday, July 17, 2014 and was overwhelmingly passed. First grade students from Hunnewell Elementary who helped lead the campaign were on the floor of the Senate to be part of this historic vote. Once the bill was passed, the students were treated to a standing ovation and many “high fives” by Senators.
On Monday, July 21, 2014, the Ms. G Bill passed both final House and Senate votes and on Thursday, July 31, 2014, Governor Deval Patrick signed H.2864, making Ms G the Official Massachusetts State Groundhog. Congratulations to the second graders at the Hunnewell School in Wellesley for their successful legislative campaign which started when they were in kindergarten!